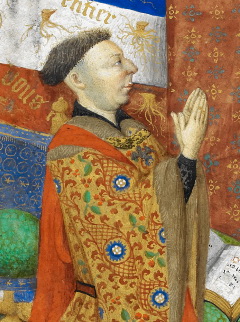 John Lancaster, 1st Duke of Bedford, was the third surviving son of King Henry IV of England by Mary de Bohun. He was brother to Henry V, and acted as regent of France for his nephew, King Henry VI. He was married to Anne of Burgundy until her death from the plague in 1432. In 1433 he married Jacquetta of Luxembourg - future mother to Elizabeth Woodville.