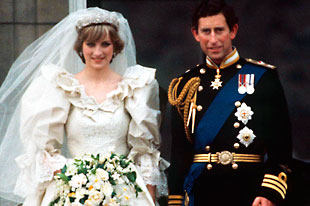 The wedding of Charles, Prince of Wales, and Lady Diana Spencer took place on 29 July 1981 at St Paul's Cathedral in London.  Their marriage was seen as the "wedding of the century".  It was watched by an estimated global TV audience of 750 million. Charles had known Diana for a few years prior to their wedding.  Diana and Charles had been dating for about six months when he proposed on 3 February 1981 at Windsor Castle.  Their engagement was official on 24 END_OF_DOCUMENT_TOKEN_TO_BE_REPLACED